Sentry Page Protection
Please Wait...
An 80 year old man presents with pain in his right axilla and arm four days after the elective insertion of a permanent pacemaker.

His vital signs are:

Describe and interpret her photograph. 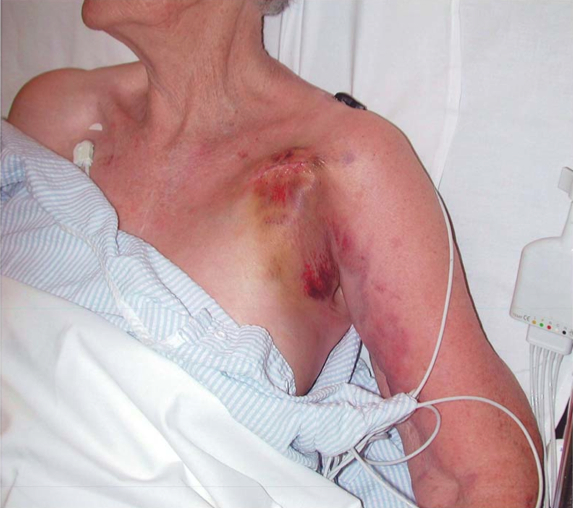 First up well done if you noticed that the patient had a sex change between the first and last sentence of the question. This is *not* a typo - it is the way the question was asked in the real exam. We will leave you to draw your own conclusions from this interesting fact.

Now, we asked you to do two things:
1. Write down the most likely diagnosis the question was about.
2. Write down three questions you thought needed to be answered as part of describing and interpreting the photo.

1. The most likely diagnosis.

The important point to realise is that each question is effectively about one condition or problem. Working this out is central to succeeding in the written exam. Usually the clinical information provided is done so to direct you to the diagnosis. In this case we have an old patient with arm pain after a pacemaker insertion. By far the most likely diagnosis to fit this clinical information is an upper limb DVT as a complication of the pacemaker.

2. What questions do  we need to answer?

The three that came to mind for the faculty were:
i) What are the important findings in the image itself?
ii) What differential diagnoses must be considered?
iii) What further investigations would be required?

So working our way through, the image shows an swollen and bruised pacemaker insertion site, with swelling and bruising tracking down the area of the brachiocephalic vein.

The implications are that this is potentially an upper limb DVT, an infective thrombophlebitis, a post insertion bleed or similar. We should also mention the possibility of arterial injury and the need to assess for this.

This patient needs an ultrasound of the upper limb, and possibly a CT arteriogram if there is a suspicion of arterial compromise.

It's easy to see how the old VAQs lend themselves towards becoming the new SAQs for the fellowship exam. Hopefully you're starting to see that how you approach the question is critical. Knowing what the question is about is the key to understanding what you are being asked, and therefore to answering correctly.

For the record, the official examination report comments are also appended below: